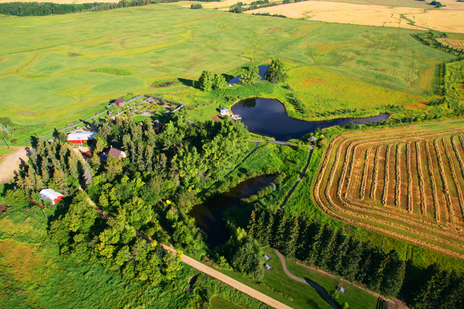 The Ellis family of Pakenham, Ontario, came west in 1886 to settle on a ranch near Calgary. Their son John, then a teenager, was married in 1894 to Agnes Clark who had come west from Ontario in 1888 to teach school.
They lived near Calgary until 1906 when they moved with their family of four children to a quarter section homestead in the Joffre district. In 1907 they built a two-storey frame house and subsequently enlarged the farm by the purchase of an additional five quarters.

After John and Agnes passed away in the early 1950s, two of their children, Charlie and Winnie, took over the farm operations. And about this same time, Charlie began a project that was to dominate the rest of his life; he set out his first nesting box for the Mountain Bluebirds.
​
In the years that followed, Charlie and Winnie rimmed the fields with some 300 nest boxes for Mountain Bluebirds and tree swallows, built and erected houses for Black-capped Chickadees, Purple Martins and Flickers, and established a huge program for feeding winter birds.


The Ellis farm quickly gained recognition as a sanctuary for all wildlife and Charlie became widely known as Mr. Bluebird, a title bestowed by the well known Red Deer naturalist, Kerry Wood.
When Charlie Ellis put up a bird box on his front lawn in the spring of 1955, he had no idea how much this simple act would change his life, or the lives of thousands of other people. Charlie was intrigued with a simple nest box plan that he came across in a farm magazine, so he decided to build one. Shortly after he set it out, he was thrilled to see that a pair of Tree Swallows took up residence. But House Sparrows soon moved in and laid claim to the box. They killed the female swallow and started to build their own nest on top of her and her dead nestlings.
Charlie was outraged. He decided that he would spend the rest of his life helping native birds by providing them with secure nesting sites, and by controlling local populations of the exotic, destructive House Sparrow.

Charlie started building more boxes, and within a few years maintained a 300-box trail around his farm. He would get up at 5:00 AM every morning to walk his trails. In his pockets he would carry a supply of white feathers – an early sought commodity by nesting Tree Swallows. Mountain Bluebirds soon found his boxes, too, and Charlie was rewarded by witnessing the bluebird populations grow from just a single pair in 1956 to more than 60 pairs in the late 1970s. The Ellis farm boasts having had the highest nesting density of bluebirds every recorded.
In addition to maintaining their extensive bluebird trail, Charlie and his sister Winnie transformed their backyard into a haven for wildlife. Orchards and flower gardens were planted specifically to attract birds, while water ponds around the farm attracted deer and other wild creatures. Backyard bird baths were kept full and a myriad of bird feeders were strategically placed around the yard. During the winter, up to two tons of sunflowers seeds were consumed by massive flocks of Evening Grosbeaks.
​
In the early 1980s, Charlie’s greatest concern was the fate of “his” bluebirds should he no longer be able to tend his nest box trail. Coincidently, Union Carbide was looking for a site to build an ethylene glycol plant. During negotiations to acquire Charlie’s land, Carbide was willing to be legally bound to make provision for the care of Charlies birds into the future.  Following a suggestion by the Red Deer River Naturalists, Carbide agreed to continue the Ellis legacy through a non-profit charitable company, Ellis Bird Farm Ltd. Union Carbide later merged with Dow Chemical and Dow continued to support EBF. In 2004, MEGlobal Canada was formed as a joint venture between Dow Chemical and Petrochemical Industries Company of Kuwait. MEGlobal provides annual funding to EBF for operations.

Winnie was born October 17, 1905 at the family homestead in the Spring Valley district southeast of Lacombe, Alberta. Winnie farmed with her parents and after the 1940s with her brother, Charlie. Following Charlie’s death in 1990, Winnie chose to move into the Lodge in Lacombe. Winnie and Charlie had great respect for nature and the environment. Winnie loved to garden and built beautiful landscaping amid the trees of the homestead. Charlie and Winnie developed a huge winter bird feeding operation. They developed a special love for the disappearing Mountain Bluebird. Winnie assisted Charlie in establishing a place where the bluebirds could once again nest in peace. Within a few years, their nestbox trail of some 300 boxes had brought back this beautiful harbinger of spring to central Alberta. Truly, they led the way in bluebird conservation. Hundreds of Canadians and Americans have since been inspired to follow their example. In their later years, Charlie and Winnie were the guiding lights and resident experts for the development of the Ellis Bird Farm. Today, the Bird Farm is a quiet spot dedicated to preservation and enjoyment of the natural environment and with special research and study into cavity-nesting birds, including the Mountain Bluebird. Winnie was predeceased by her sister May Rasmussen in 1975, by her brother Alex in 1979, and by her brother, Charlie, in 1990. At Winnie’s request there will be no funeral service. If friends desire, memorial contributions may be made to Ellis Bird Farm, Box 5090, Lacombe, AB T4L 1W7